Production and potential of biomethane

Production and potential of biomethane

To reduce its reliance on Russian fossil fuels, the REPowerEU plan further increases the ambition level beyond the Fit-for-55 Package for gas alternatives (biomethane, renewable hydrogen), deployment of renewables, and structural demand measures.

The future energy mix is predicted to be dominated by wind and solar power, both as generators of electricity and in the production of hydrogen (H2). Yet biomethane also has a relevant role to play to decarbonize the EU's energy system, because is one of the main renewable gases of the future and available today. It’s the cheapest and easiest to scale form of renewable gas.

Biomethane is a near-pure source of methane produced either by upgrading biogas or through the gasification of solid biomass followed by methanation.

Anaerobic digestion is the process in which microorganisms (as bacteria) biodegrade organic materials (e.g., solid animal manure, biowaste and food waste) in the absence of oxygen, resulting in biogas, which contains around 55% methane and the rest being mainly carbon dioxide (CO2).

The biogas can be upgraded to biomethane, by removing CO2 and other gas impurities.

Then the biomethane can be injected into the gas grid to substitute natural gas. The CO2 could be captured and used in industry (e.g., beverage industry).

Biomethane production through anaerobic digestion and its upgrading is a proven and market-ready technology. Costs today range from 50 EUR/MWh to 90 EUR/MWh and largely depend on the feedstock used and plant scale. There are almost 20,000 biogas plants operating in Europe today and almost 1,000 of them upgrade and inject biomethane into the natural gas grid.

Thermal gasification involves a complete breakdown of dry lignocellulosic biomass (e.g., woody biomass, and agricultural residues) and municipal solid waste, at high temperature in a gasifier in the presence of a controlled amount of oxygen and steam.

Biomass gasification with biomethane synthesis is not yet commercially available and only exists at demonstration scale, for example, the Gaya project in France. However, the potential to scale up is large in the mid-term (2030 and beyond).

Costs today are estimated to average around 85 EUR/MWh, based on a plant size of 20 to 40 MW, and, in the future, could cost around 60 EUR/MWh .

Both technologies and selected feedstocks characteristics (e.g., pH, temperature, humidity level, and nitrogen) have influence in the quantity of gas obtained and its chemical characteristics.

For the described reasons, the European Commission fully recognizes the biomethane benefits and thus set a target of 35 billion cubic meters (bcm) of annual production by 2030 and 95 bcm by 2050.

Based on sustainable feedstocks, in the follow figure are showed the potential of biomethane production in each EU Member State (plus Norway, Switzerland, and the UK) in 2030. A potential of 38 bcm is estimated for anaerobic digestion in 2030 for EU-27, while for thermal gasification a potential of 3 bcm/year.

The top 5 countries with anaerobic digestion potential in 2030 include France, Germany, Italy, Spain, and Poland. Key feedstocks in 2030 are animal manure (32%), agricultural residues (24%) and sequential cropping (21%).

In the other hand, the top 5 with thermal gasification potential in 2030 include France, Germany, Spain, Sweden, and the UK. Key feedstocks are forestry residues and wood waste, which collectively represent over 60% of the potential. 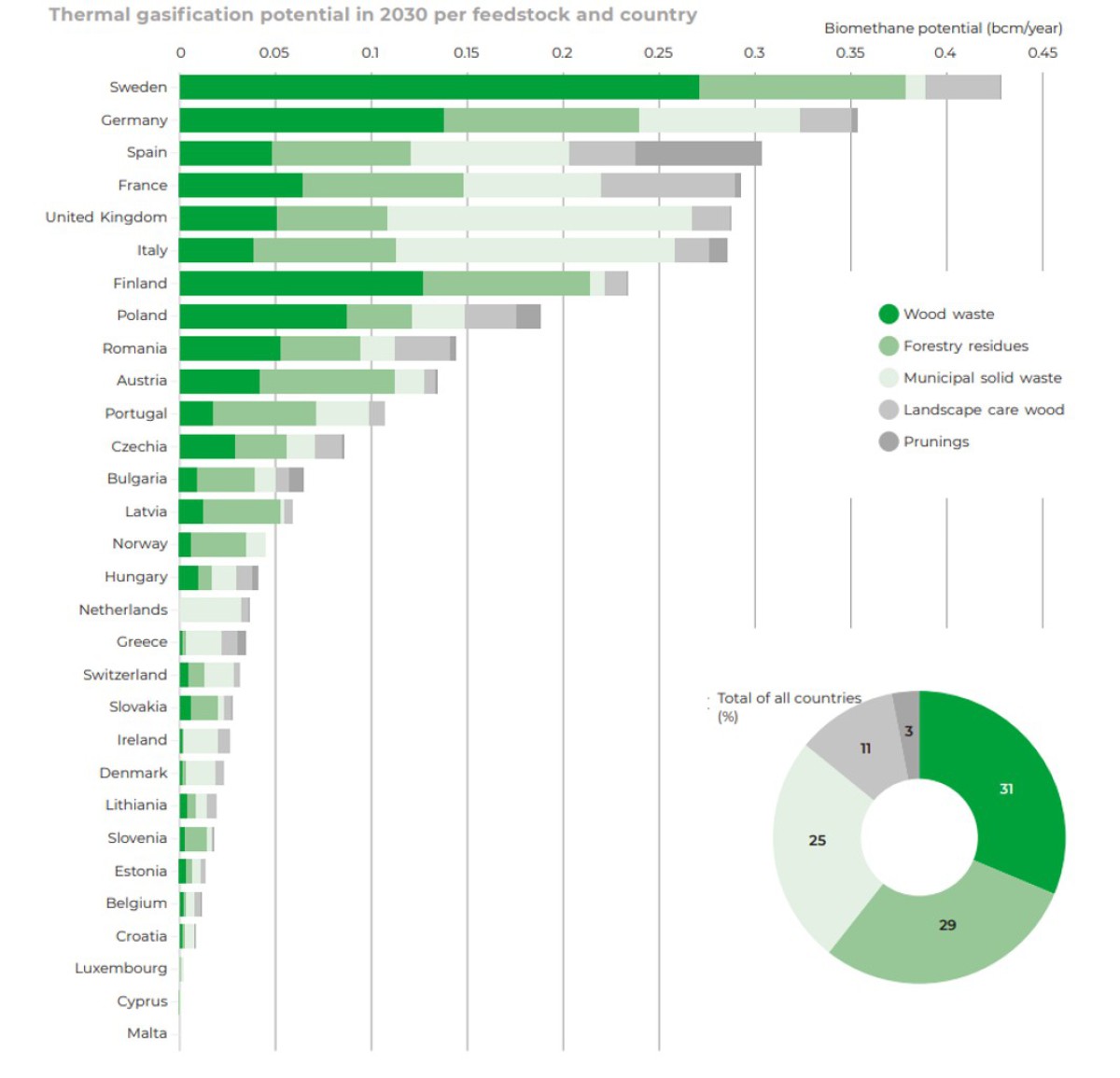 The following findings stand out:

While there are still some improvement opportunities:

The Tully Biogas Plant, located near Ballymena in Northern Ireland, is one of the first facilities in the world that generates renewable energy from chicken litter as the sole feedstock using an innovative combination of anaerobic digestion and nitrogen stripping technology.

With a construction cost of £23 million this plant processes up to 40,000 tonnes of locally sourced chicken litter each year and generates 3MW of renewable electricity.

The processing of chicken litter through conventional AD systems has been historically challenging due to the elevated nitrogen present in the litter which inhibits the digestion process. To prevent this, chicken litter (15-25%) is normally digested together with other feedstocks (75-85%) which have lower nitrogen content. 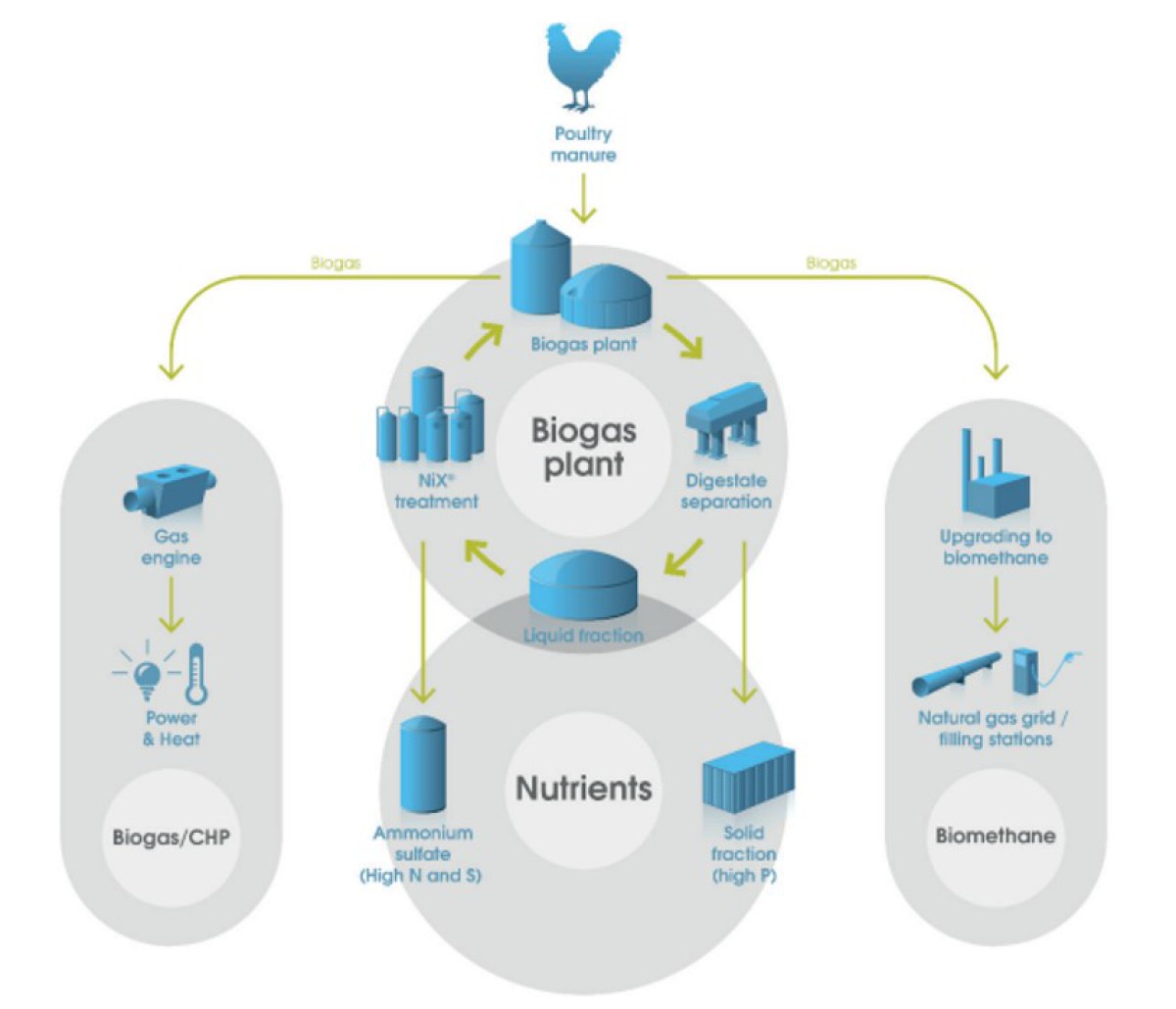 The rapid scale-up of biomethane will need more recognition and support from Member States, through ambition level of policies supporting gas decarbonization, and realizing, as a strategic vector, the potential to recycle their wastes and residues for sustainable gas and biofertilizer production.

By 2024, EU countries must collect separately organic waste, which will be an opportunity to upscale the production of sustainable biomethane and create income opportunities for farmers and foresters. In Portugal, this is highlighted in Plano Estratégico para os Resíduos Urbanos 2030 (PERSU 2030) and aligned with other legal frameworks.

Additionally, the use of manure for biomethane production can also play an important role in reducing fugitive methane emissions in the agricultural sector. These benefits need to be also recognized by policy makers.

The actions should also create the preconditions for sustainable upgrading and safe injection of biomethane into the gas grid. The EU has already created well-functional trading conditions for renewable electricity. The gas sector needs similar mechanisms to trade volumes and Guarantees of Origin of renewable gas across borders.

Another proposed action includes the assessment of challenges, bottlenecks, and other possible measures from the infrastructure perspective for a cost-efficient deployment of biomethane. Moreover, national authorities, TSOs and DSOs should assess potential investment challenges to increase the uptake of biomethane and connect decentralized production sites with consumption centers over large distances.

Biomethane is needed to complement renewable electricity, and green hydrogen is currently not widely available and at least until 2030 the costs will be high.

The Commission will consider broadening the scope of the fuel supply obligation in the Renewable Energy Directive to cover all uses of biomethane. The Commission's recommendation on permitting should also facilitate new biogas and biomethane investments.

This will include streamlining existing funds and funding mechanisms such as common agriculture policy, structural and cohesion funds, national resilience and recovery plans, Horizon Europe or the innovation fund and the modernization fund, LIFE funding and other national funding opportunities. In Portugal, under “support for renewable gases production”, there are already incentives for biogas upgrading into biomethane.